Berwyn was once of the nobility and held in high esteem; renowned for his archery, running and skills in fashioning of stone. Unfortunately, Berwyn was also prone to drinking and gambling and his success with the bow was not mirrored in these pursuits. The rogues Berwyn owed money to decided he could repay his debt with his considerable talents to assist in the theft and rustling of cattle. On one raid, the rogues were caught in the act and revealed his role. Berwyn’s family was exiled and Berwyn himself placed into servitude to compensate for the cost of his crimes.

During this servitude, Berwyn was captured by the Selentine invaders and left to rot in Llanhros Fort. 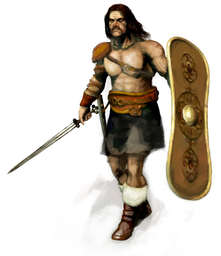